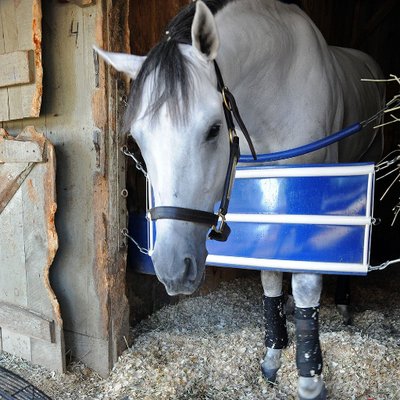 In 2013 , a  grey colt named Juba  made his first start at Aqueduct with little fanfare. Over the next three years, he ran 13 times, winning three races  and a total of $175,000 in purses for his owner Centennial Farms, and appeared  only once in a graded stakes in which he finished fourth.

Now, Juba has a Twitter account with nearly 3500 devoted followers, and it’s probably safe to say he’s  the most beloved horse on Twitter ever, with the possible exception of  Triple Crown winner American Pharoah.

A few months after his first start, Juba started to tweet.  By December 2014 he had close to 700 followers even though he had yet to win a race.  Juba’s tweets were charming :  he posted his workouts, claimed to be watching stablemates’ races while being vanned to Florida, posted his “baby pictures” as a foal,  rooted for the Indianapolis Colts, watched movies on “Neighflix”,  expressed gratitude at Thanksgiving to his veterinarian for taking care of him, and sent a Christmas card to his followers:

“I find myself tapping my hoof to the music TVG plays between races when there is no human host,” he tweeted.  Juba had managed to create and entertain a community of fans who love horses and racing —separate and apart from outcomes or betting interests.

In February, 2015  @DanonymousMan wrote an article for America’s Best Racing dubbing Juba “a Twitter sensation.”  With typical humility, Juba tweeted  he believes this article provided traction on social media, (it certainly did, and I’m grateful to @Danonymous Man, too) but I think maybe Juba isn’t  giving himself enough credit.  He paved the way for horses to have personalities that fulfill fans’ deep desire  to connect with them.  Like many fans, I never saw Juba race “in person,” but I feel I know him better than horses I’ve really seen.  Other  horses have their own Twitter accounts, some with more followers than Juba…but none of them tweet with the same panache Juba does.

Like the Wizard of Oz, there is a woman (or man) behind Juba’s curtain who has created a fanciful persona  confirming our fondest beliefs:  that horses enjoy racing, that they are sorry when they lose and pleased  when they win, that they value our support, that they are happy creatures overall.    In other words, Juba is  like us, or how we would like to be: pleasant, witty, playful, taking life’s setbacks in stride, and always giving our best. America’s Best Racing reports the tweeter has chosen to remain anonymous, and for that I congratulate him or her:  this person has given up a lot of praise and notoriety for the greater goal of continuing the enchantment for Juba’s fans.

On September 9,   the day Centennial Farms   announced Juba’s  retirement from racing, it felt like someone had died.    Juba  tried to keep a brave face, but along with his mourning fans, appeared to believe that  our days of Jubanews were over.  Characteristically, he expressed  sorrow at his retirement and  his exit from the Twitterverse . But the very next day , he  announced that his new owners  (Taylor Mountain Farm in West Virginia, where he will stand at stud in 2017) wanted him to continue tweeting. Soon afterward,   Juba tweeted, “I can’t wait to see my kids run in West Virginia.”  Neither can we.

So Juba is retired from racing, but not from our hearts.  Already Twitter is abuzz with talk of farm tours and stallion parades, and people like me who never heard of Taylor Mountain are thinking of going there just to give Juba a pat on the neck and a peppermint.  We can only imagine the fun that awaits  when Juba’s first mares step off the van  or his first foals hit the ground, and there’ve  even been nickers of suggestion that Juba might want to live at Old Friends Farm when his stud career is over.  It seems that Juba’s story  will always have another chapter.

I haven’t  met the tweeter behind Juba’s stall door, and although I’m curious, part of me hopes I never do.  Until the day the real Juba is laid to rest,  I’m counting on him or her to keep Juba’s magical message alive in this world.

In the beginning there were

All laden with hopes and dreams

Of those they knew the way horses know

And others they had never seen and would never

Feel or touch or know

But still they carried

What we needed them to carry

More than iron, lead or silk

A chance to be their own dream

In the gate they shift and paw

When time stops for them and starts for us

And running is all there is.

In their hearts they run

The way they might if they were truly free

But the race is their freedom now

Confined along the rail or breathing dirt

Only a few may lead

And so they do.

But in this race there is one horse

Who takes what until now has

Accorded by his given name

Perfect and faithful to human desire

He runs against the race itself.

In his jockey’s hands

To overtake and thus become all those

From time and memory

Ordinary and distant behind him

In the stands we cheer or cry

By the animal flash

There is no end at all

Our race is over but not his.

He runs without a wire

We’re at the post to explore the beauty and joy of horse racing….don’t get left at the gate!

This is a text widget, which allows you to add text or HTML to your sidebar. You can use them to display text, links, images, HTML, or a combination of these. Edit them in the Widget section of the Customizer.